According to Carl G. Jung's theory of psychological types [Jung, 1971], people can be characterized by their preference of general attitude:

their preference of one of the two functions of perception:

and their preference of one of the two functions of judging:

The three areas of preferences introduced by Jung are dichotomies (i.e. bipolar dimensions where each pole represents a different preference). Jung also proposed that in a person one of the four functions above is dominant – either a function of perception or a function of judging. Isabel Briggs Myers, a researcher and practitioner of Jung’s theory, proposed to see the judging-perceiving relationship as a fourth dichotomy influencing personality type [Briggs Myers, 1980]:

The fourth criterion, Judging – Perceiving, reflects how a person implements the information he or she has processed. Judging means that a person organizes all of his life events and, as a rule, sticks to his plans. Perceiving means that he or she is inclined to improvise and explore alternative options.

The first letter in the personality type acronym corresponds to the first letter of the preference of general attitude - “E” for extraversion and “I” for introversion.

The second letter in the personality type acronym corresponds to the preference within the sensing-intuition dimension: “S” stands for sensing and “N” stands for intuition.

The third letter in the personality type acronym corresponds to the preference within the thinking-feeling pair: “T” stands for thinking and “F” stands for feeling.

The forth letter in the personality type acronym corresponds to a person’s preference within the judging-perceiving pair: “J” for judging and “P” for perception.

What do percentages next to the personality type words or letters mean?

Humanmetrics Jung Typology Test™ (JTT™) and Jung Typology Profiler for Workplace™ (JTPW™) instrument determine the expressiveness of each of the four personality type dimensions (Extraversion vs. Introversion, Sensing vs. Intuition, Thinking vs. Feeling, and Judging vs. Perceiving.)

In JTT™ and JTPW™, the scales of these four dimensions represent a continuum between two opposite poles, from 100 at one pole to 100 at another pole. I.e. Extravert-Introvert dimension is a continuum from 100 on Extraversion (i.e.  respondent is a 100% extravert) to 100 on Introversion (i.e.  respondent is a 100% introvert). In other words the scale is 200 units long:

The same pertains to the S-N, T-F, and J-P dichotomies.

The Basics of Jung's Typology 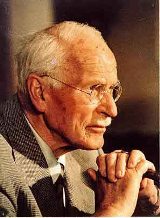 Jung called Extraversion-Introversion preference general attitude, since it reflects an individual’s attitude toward the external world distinguished by the “direction of general interest” [Jung, 1971]: the extravert maintains affinity for, and sources energy from the outer world, whereas the introvert is the other way around – their general interest is directed toward their inner world, which is the source of their energy.

As mentioned above, Jung introduced a pair of judging functions - thinking and feeling - and a pair of perception functions – sensing (or “sensation”), and intuition.

Jung introduced the idea of hierarchy and direction of psychological functions. According to Jung, one of the psychological functions - a function from either judging or perception pair – would be primary (also called dominant). In other words, one pole of the poles of the two dichotomies (Sensing-Feeling and Thinking-Feeling) dominates over the rest of the poles. The Extraversion-Introversion preference sets the direction of the dominant function: the direction points to the source of energy that feeds it – i.e. to the outer world for extraverts and to the inner world for introverts.

Jung called feeling and thinking types “rational” because they are characterized by the dominance of judging functions that provide reasoning rationale (be it thinking or feeling). “Rational” or Judging preference results in thinking, feelings, response and behaviour that consciously operate in line with certain rules, principles or norms. People with dominant "rational" or judging preference perceive the world as an ordered structure that follows a set of rules.

He called sensing and intuitive types “irrational” because they are characterized by dominance of the functions of perception (either sensing or intuition), and therefore their “commissions and omissions are based not upon reasoned judgment but upon the absolute intensity of perception” [Jung, 1971]. “Irrational” or Perceiving preference operates with opportunities, i.e. with a range of possible outcomes that result from assumed premises or from sensations, mostly driven by the unconscious processes. People with dominant "irrational" or Perceiving preference see the world as a structure that can take various forms and outcomes. It is possible to determine, either by observation or by asking certain questions, preference of Judging vs. Perceiving and the strength thereof in a person.