Like their fellow SPs, ISTPs are fundamentally Performers (note the capital 'P' :-)), but as Ts their areas of interest tend to be mechanical rather than artistic like those of ISFPs, and unlike most ESPs they do not present an impression of constant activity. On the contrary, they lie dormant, saving their energy until a project or an adventure worthy of their time comes along--and then they launch themselves at it. The apparently frenzied state that inevitably ensues is actually much more controlled than it appears--ISTPs always seem to know what they're doing when it comes to physical or mechanical obstacles--but the whole chain of events presents a confusing and paradoxical picture to an outsider.

ISTPs are equally difficult to understand in their need for personal space, which in turn has an impact on their relationships with others. They need to be able to "spread out"--both physically and psychologically--which generally implies encroaching to some degree on others, especially if they decide that something of someone else's is going to become their next project. (They are generally quite comfortable, however, with being treated the same way they treat others--at least in this respect.) But because they need such a lot of flexibility to be as spontaneous as they feel they must be, they tend to become as inflexible as the most rigid J when someone seems to be threatening their lifestyle (although they usually respond with a classic SP rage which is yet another vivid contrast to their "dormant," impassive, detached mode). These territorial considerations are usually critical in relationships with ISTPs; communication also tends to be a key issue, since they generally express themselves non-verbally. When they do actually verbalize, ISTPs are masters of the one-liner, often showing flashes of humor in the most tense situations; this can result in their being seen as thick-skinned or tasteless. 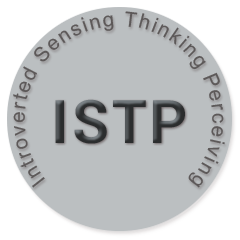 Like most SPs, ISTPs may have trouble with rote and abstract classroom learning, which tend not to be good measures of their actual intelligence. They tend, sometimes with good reason, to be highly skeptical of its practical value, and often gravitate towards classes in industrial arts; part-time vocational/ technical programs can be useful to even the college-bound ISTP. In terms of careers, mechanics and any of the skilled trades are traditional choices, and those ISTPs with strong numerical as well mechanical gifts tend to do extremely well in most areas of engineering. Working as paramedics or firefighters can fulfill the ISTP need to live on the edge; they are at their best in a crisis, where their natural disregard for rules and authority structures allows them to focus on and tackle the emergency at hand in the most effective way.

ISTPs with more sedate careers usually take on high-risk avocations like racing, skydiving, and motorcycling. While aware of the dangers involved, they are so in touch with the physical world that they know they can get away with much smaller safety margins than other types.

Functional Analysis Of The ISTP

Thinking, the dominant function, generally keeps its opinions to itself. The inner world of introverted thinkers resembles Plato's rec room, where every untried idea runs the gauntlet of Truth. The personal or political source of the alleged fact matters little to Thinking; each tenet must stand on its own premises. Introverted thinkers focus their directives in on themselves, and would like nothing better than for others to do the same. One ISTP friend displays a poster of an orangutan with the caption, "If I want your opinion, I'll beat it out of you." Suffice it to say that ISTPs are by nature free spirits.

Auxiliary Sensing provides Thinking with all manner of information about the physical world. ISTPs possess heightened sensory awareness. And as other SPs, ISTPs are energized by responding to their impulses. Sports appeal to many ISTPs for the sheer sensory experience.

This combination of dominant introverted thinking and auxiliary extraverted sensing results in no-nonsense realism. The uncanny troubleshooting ability which predisposes many ISTPs to hands-on diagnostics (especially with machinery and computers) or detective work is most probably rooted in this pairing.

Tertiary iNtuition maintains a low profile. ISTPs are prone to consult "gut feelings" that most probably arise from this function unconsciously. As with other SP types, ISTPs generally lack enthusiasm for theoretical and philosophical issues, and less for the endless discussions in which the Intuitive (especially NP) types so frequently engage.

The inferior (least) feeling function is extraverted and, when operative, quite visible. As with all types, the inferior function is relatively simplistic and often operates unconsciously in an all-or-nothing manner. When operative, Feeling's sensitivity and loyalty has the potential for great benefit and utter peril. It would seem that ISTPs would do well to nourish and cherish Feeling judgement, but to vigilantly supervise and protect it from predators and other catastrophes.